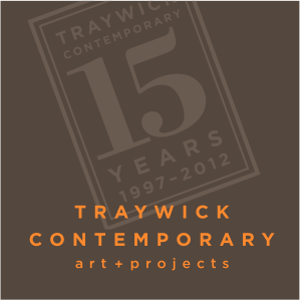 When I started Traywick Contemporary (née Gallery) in 1997 I could barely think ahead to the next 15 minutes, let alone the next 15 years. It was an exciting and busy time; then I blinked and it became 2012. Everything has changed, both in and out of the art world.

Thinking about the past 15 years, I keep coming back to all of the people who have been important to the gallery's success and sustainability over that time. Some of them are well-known, others should be. So to mark the occasion, I have invited a special group to talk with me about the changes they've seen over the last 15 years in the Bay Area and beyond, to comment on important events from their unique perspectives, and to have a look at what lies ahead for us all in the next 15 years.

From her post in Colorado I had a walk down memory lane with Heidi Zuckerman Jacobson, current CEO and Director, Chief Curator at the Aspen Art Museum and former Phyllis Wattis MATRIX Curator at the Berkeley Art Museum. In addition to talking about her time in the Bay Area, we also talked about what skiing and art have in common, kids ditching art after 3rd grade, and the museum building craze, among other things.
Jody Knowlton, Kerri Hurtado and Tessa Wilcox of Artsource Consulting

I have had the pleasure of working with Artsource Consulting from the early days of my business and they continue to impress with their professionalism and dedication to their clients as well as the artists they discover, recommend, and follow with great interest. I sat down with Jody Knowlton, Tessa Wilcox, and Kerri Hurtado to talk about the role of an art advisor and what makes Artsource a leader in the field.
Karin Breuer, Curator in Charge, Achenbach Foundation for Graphic Arts

Karin Breuer is the Curator in Charge at the Achenbach Foundation of Graphic Arts, the prints and drawings department of the Fine Arts Museums of San Francisco. Karin and I sat down for an afternoon to talk about the history of the Achenbach, her role as a curator, and the responsibility that collectors have to the work they collect. "Art comes with its own responsibility," said Breuer. "It's usually the more experienced collectors who feel they're not really owners. They have the work here for a limited time on earth, and it belongs to the world at large. It doesn't belong to the artist, nor does it belong to them."
Dirk Park, Co-Founder of Aqua Art Miami

Dirk Park is the Co-Founder of Aqua Art Miami and the owner/director of Prole Drift in Seattle. We talked about the role of art fairs in the new art economy, and how it's changing what it means to have a gallery. "Art fairs are now another way of breaking down the neighborhood brick and mortar restrictions," argues Park. "I think that allows people to stretch their programs more than they could in a strictly local situation. ... The model is shifting from a 4000 square foot warehouse space to something that is more flexible. The days of square footage, I think, are gone."
Chuck Mobley, Director of SF Camerawork

For the second installment of our 15th Anniversary Project, we are proud to present Five Questions for Chuck Mobley, the newly-named Director of SF Camerawork. The non-profit gallery has been presenting innovative photography exhibitions and providing broad-based support and exposure to emerging photographers in the Bay Area since 1974. Chuck discusses his organization's move to a new space this January, and some of his observations about photography in the Bay Area over the last 15 years.
Kathan Brown and Valerie Wade of Crown Point Press

My first job in the San Francisco art world was at Crown Point Press from 1990-1993. My time there has had lasting importance for me and significantly influenced how I work with my artists and run my business. This year marks the 50th anniversary of Crown Point Press. Kathan Brown's intrepid leadership and vision have guided the Press though all five decades. Valerie Wade has been at her side for the past 25 years. Together they have seen a lot of changes during this remarkable span of time, not only in the print world, but also in the larger art community. I had the great pleasure of sitting down with both Kathan and Valerie in December of 2011.