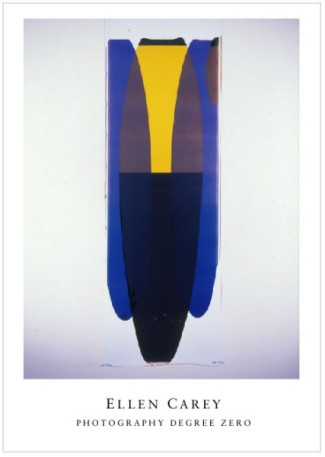 The title of the exhibition refers to Roland Barthes' 1953 book Writing Degree Zero, which investigated modernist French literature and its minimal, abstract style. With the photographs in this exhibition, Carey explores the "less-is-more" tenets of minimalism and abstraction in her large-scale Polaroid "pulls," "rollbacks" and negatives.

In her new work, Carey examines photography’s primary agent - light - with the highly saturated palette and soft-edged brilliance of the Polaroid dyes. The absence of light is also addressed in her work, where black is used for the "non light" exposed images. Her language around photography further reflects her interest in process. Her invented term "pulls" describes the act of pulling the long film through the large format Polaroid camera; "rollbacks" are the prints that are re-fed through the camera; while the negatives, usually discarded, are allowed to drip, and to oxidize over time.

Without reference to specific things being photographed, Carey revisits the alchemy, curiosity, and wonder of photography, reminding us that as a medium it is both an invention and a process that celebrates the image or non-image equally. Her most recent work pushes even further the inherent contradiction of minimalist photography.

Ellen Carey’s work has been exhibited widely throughout the US. Recently, an exhibition featuring her large scale Polaroid installations titled "Mourning Wall" received wide critical acclaim when it was first shown at Real Art Ways (Hartford, CT) and as it continues to travel to venues such as the International Center of Photography, Chicago. Her work is included in major museum collections such as The Whitney Museum of American Art, Albright-Knox Art Gallery, Metropolitan Museum of Art, Art Institute of Chicago, Los Angeles Museum of Art, International Center of Photography, and the Wadsworth Athenaeum, Hartford, CT. Two new books on photography include her work: "Photography's Antiquarian Avant-Garde" by Lyle Rexer (Abrams) and "American Visions-Highlights from The Whitney Museum of America Art's Photography Collection".