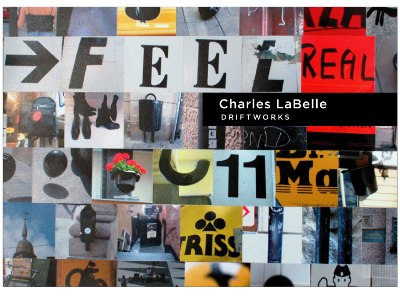 Images from the Exhibition

Traywick Contemporary is pleased to announce SITE 2, the second in its ongoing series of exhibitions and projects in changing locations. SITE 2 will feature a solo exhibition of new work by New York-based artist Charles LaBelle. Titled Driftworks, the exhibition will be located at 49 Geary, Suite 513 in San Francisco. The show opens Thursday, October 14 and continues through Saturday, November 20, 2004. There will be a reception for the artist on Thursday, October 14 from 5 to 7 pm.

Driftworks presents recent photo-based work from LaBelle’s new and ongoing series of large-scale "compound photos" which incorporate literally thousands of images the artist has shot while visiting cities across the world, including Stockholm, Venice, Prague and Miami. Acting as both tourist and crime-scene photographer in creating these pieces, LaBelle photographs a dizzying array of visual details. His experiences of each urban environment are at once distracted -- prone to all the fleeting impressions and chance encounters offered in the modern metropolis -- and also intensely focused. Along the way, Labelle records ordinary things in great detail -- buildings, signs, dumpsters, soda cans, graffiti, and passers-by -- which then gives way to increasingly abstracted and unidentifiable bits of shadows, pavement, and fields of color. Back in his studio, he assembles the inch-square images (cut from proof sheets) into intricate, tapestry-like works that form a poetically articulated depiction of each different location.

In a recent review of other works from LaBelle’s Driftworks series, Los Angeles Times art critic Christopher Knight comments that "viewing these accumulations provides soulful insights by dropping established patterns of consciousness...being lost by being found."

This is Charles LaBelle’s third solo exhibition with Traywick Contemporary. A much anticipated book from Nazraeli Press titled Driftworks -- Red Venice is due in the fall of 2004.