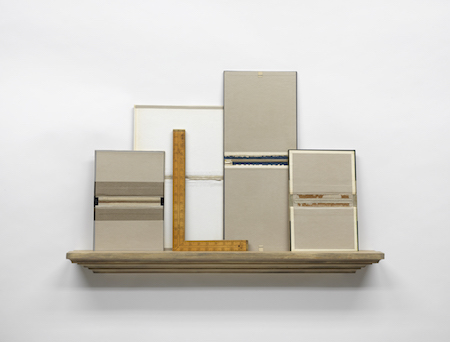 Traywick Contemporary is proud to celebrate its 20th anniversary with a year-long series of exhibitions and events where old friends and new audiences can engage with our artists and our program. We launch our 2017 schedule with two solo exhibitions, featuring Chicago-based artist John Fraser and Oakland painter Steuart Pittman, both of whom work in direct opposition to the accelerated pace of our contemporary culture. Traywick Contemporary first exhibited Fraser’s work in 2001 and Pittman worked as Fraser’s studio assistant for several years before moving to the Bay Area. This intertwined artist history and consistency of vision are two hallmarks of the gallery’s program over the last 20 years.

John Fraser’s practice is built on the idea that making art and looking at art are both slow and considered processes that reward the individual with unexpected visual discoveries. While at first glance his minimalist work appears abstract, each piece is in fact created from, and responds to, found materials and objects that have histories of their own. Fraser incorporates objects like vintage tools (old rulers, T-squares, measuring devices) and discarded books (including their covers, spines and end papers), and when recombined in his work these often-underappreciated materials have a strong, quiet presence.

Fraser’s formal approach is dominated by linear compositions and systems of classification and ordering. His geometrical forms and shapes can be seen as metaphors for looking, as through windows and doors. His compilations feature overlapping planes of monochromatic, neutral tones, and the artist’s added gestures that blend seamlessly with dried glue patches, oxidized page edges and other incidental marks inherent in the materials. In a 2010 essay, curator Hamza Walker asked whether Fraser’s collages are considered “pictorially constructive, or sculpturally deconstructive.” Indeed, the artist’s play between making and un-making is subtle; it can be difficult to determine which elements are created, and which are found. In his work, Fraser achieves a rare visual alchemy, enabling ordinary materials to transcend their original intent or surroundings.